It only lasted fifteen seconds ...

But it is one of the most exciting contacts a ham can make!

Discussions between the ARISSS team (Amateur Radio on the ISS) and NASA were months in the making: Could the ISS astronauts schedule time on Field Day weekend for some FM voice contacts? Such contacts are seen by many hams as the ULTIMATE in amateur radio contacts.

Well, it was announced by ARISS on June 23-24, 2014 that Astronaut Reid Wiseman (US) and possibly Astronaut Alex Gerst (ESA) would be able to be in the Columbus module and working with the amateur radio equipment for several passes over North America - if nothing else cropped up that would take precedence.

The first of the passes - beginning at 11:11AM PDT Saturday, June 28 - was a most extraordinary one for Southern California: For my location in Rancho Cucamonga, CA, it was about an 85-degree elevation pass! One could not ask for a better pass  to work! See the PocketSat3 pass photo on the right.

Because that was all that was needed!

The ISS/ARRL team will send you this QSL card for these contacts (as well as for any radio receotion from the ISS).

Our ARISS contact for students at Flabob Airport in Jurupa Valley CA was a tremendous success for the students AND the city -m then Californias NEWEST city! 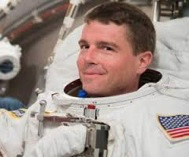 I already programmed the anticipated frequencies (Region 2) for FM voice, as well as the 145.825 packet frequency: If the astronauts were not able to work FM voice, packet might have been turned ON instead - and that would still allow reception of the ISS to show to any audiences and/or Field Day attendees!

At 11:10AM PDT, I started monitoring, pointing my handheld beam to the south-west. Within a minute, I heard someone local transmitting on the downlink accidentally. But then I heard Commander Wiseman "NA1SS" confirm reception for a couple stations! Wonderfully clean and clear, with hardly any background noise at all.

Then I keyed my mic and announced myself, and was instantly acknowledged by Astronaut Wiseman at 11:16AM PDT. I signed off by thanking him for what he was doing for amateur radio this weekend. Others immediately attempted contact and were acknowledged.

I had talked to the ISS before - during our ARISS project in April, 2012 at Flabob Airport. But you know how scheduled and calculated and scripted-to-the-second those sessions are. But this was a different kind of excitement, due to the possibility of it NOT happening at all.

SO - THANK YOU to the ARISS team, NASA, and fellow hams for

making this pass a wonderful event for all!

YES! - the ISS/ARISS team will send you a QSL card for these contacts! For North America, submit your request (QSL card, or typed report) and include:

Include a large self-addressed, stamped return envelope with sufficient postage. For US contacts, submit your request to ...

For those of you outside North America, please refer to:

- the time in UTC

- frequency and more (voice, packet, SSTV, or even SWL 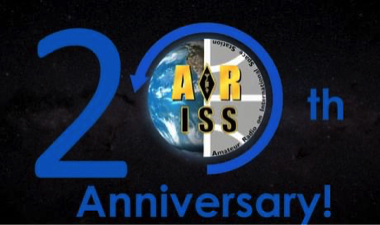